The Most Expensive Piano In The World

When it comes to the most expensive instruments in the world, it is difficult to beat the piano. Outside of possibly a pipe organ, which is a stationary version of the piano built into a large room, the piano is a large instrument that takes on the appearance of a showpiece.

The most expensive pianos found worldwide typically share a few specifics, including being on the larger side and featuring intricate detailing and craftsmanship. The most expensive piano does depend on what the next person is willing to pay for it; but here is what you need to know with regards to the most piano.

What Are the Most Expensive Piano Brands?

Image by Liz Beas via Pixabay.com

Often times you will pay for higher quality when it comes to a piano. That is because the more expensive brand piano uses higher-end materials and is built by hand. Now, some pianos (most of which are on the list of most expensive pianos in the world) do feature outlandish materials, such as crystal and gold, which are not necessary for an excellent piano and are more decorative than anything else.

Naturally, if you’re interested in playing or learning to play a piano, you don’t need something made from gold or with 40 layers of wood carvings. However, it is important to know a bit about the top piano brands.

One piano brand to consider is the Italian company Fazioli. This company hand-makes everything. The least expensive pianos from this company will run you just under $100,000, while the most expensive options pushing closer to half a million. The craftsmanship here can’t be duplicated, so if you have the money, Fazioli is one beautiful brand.

A bit more on the level is Steinway. This is one of the most popular piano brands of all time. The company makes more affordable pianos, but it also makes some incredibly expensive pieces. With the wide spectrum of piano prices, Steinway is a great brand that you may be able to purchase.

Mason & Hamlin is similar to Steinway in that it does produce higher end pianos, although you usually won’t pay as much as a Steinway. Entry level costs for a Mason & Hamlin will set you back around $20,000 and go up from there (although you may be able to shop around for a used one for far less).

Where Is the Most Expensive Piano Located?

Nobody knows exactly where the single most expensive piano in the world is currently located. It was built by the Heintzman Piano Company, which is a Canadian company, but was actually built in Beijing, China. It was kept in Beijing for the Opening Ceremony of the Beijing Olympic Games, which took place in 2008, and then it was eventually auctioned off. From there nobody is exactly sure what happened to it.

The identity of the auction winner was kept under wraps, and whether the auction owner still owns it or has sold it off again is not known. However, its last know whereabouts was Beijing, China.

The Most Expensive Piano In the World

Before getting to the most expensive piano in the world, let’s look at a few that just missed the title (and who could always push past, if someone decided they wanted to spend more money for one of these to bring into their own personal collections).

Paying under half a million dollars? Now that’s a bargain, right? Well, when you’re talking about the most expensive piano in the world, it sure is.

There is the Grand Fazioli, which is an Italian piano valued at $400,000. It one of the largest pianos on this list at 10 feet in length (which makes it a concert grand piano). The Fazioli is handmade and remains one of the most expensive brands in the world because of this very feature. It also is decked out in jewels, to help bring the sparkle.

The La Mort Du Cygne by Erard is built out of solid mahogany. While it might not have the encrusted jewels as the Grand Fazioli (or the size), this piano is valued at around $409,000. It boasts intricate carvings along the sides and looks like a piano you’d find in an enchanted home deep in a Bavarian forest.

Chances are you wouldn’t expect to find an upright piano in the list of most expensive pianos in the world, but here one is. This Richardson’s Inc. piano didn’t make the list because of its incredible musical sound, though. It made the list because it appeared in the Hollywood classic “Casablanca.”

Valued at $602,500, if you want a piano that is also an incredible conversation piece, this is the piano for you. And as an interesting note, because Casablanca is a black and white movie, you likely wouldn’t be able to guess the color of this piano. It’s a dark baby-blue.

If someone told you there was a Marilyn Monroe Baby Grand piano that was later purchased by Mariah Carey, you’d probably expect it to be an expensive piano. You’d be right. This white baby grand is valued at around $662,500 (at least that’s how much Ms. Carey paid for it). 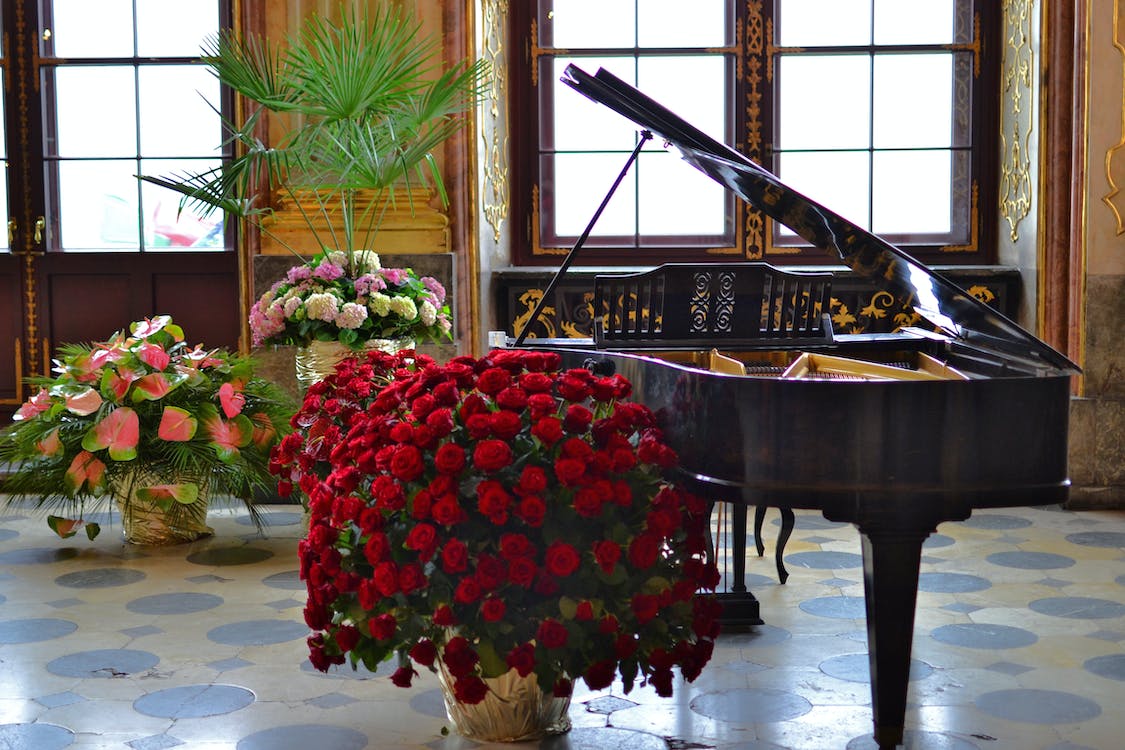 The other pianos are interesting, but these are the pianos that truly define the notion of “world’s most expensive.” First, there is the Alma-Tadema Steinway, which runs for $1.2 million. It was designed by Sir Lawrence Alma-Tadema and built by the classical piano builders Steinway. It features materials including mother-of-pearl and brass lyre, while everything is hand carved. This is a piano that has always been expensive, with an initial asking price of over $54,000 back in the late 1800s.

The Sir Lawrence piano is on one side of the spectrum, dating back over 100 years. The Galaxy Piano is on the other. It is a new piano, although it is built out of 24-carat gold, which is plated over a fiberglass body. It also features curved keys. These pianos (there were five made) come out of the United Arab Emirates and run for around $1.3 million. Because the pianos are on the newer side and not exactly used on concerts, very little is known about the actual sound quality (fiberglass isn’t exactly as great of an audio conductor as wood), but hey, when you have a piano made out of gold does it even matter?

Steinway built a piano called the Sound of Harmony for a Chinese art collector back in 2007 named Guo Qingxiang. The piano features over 40 layers of wood and has some painted, crystallized gold. It’s incredibly outlandish and decorative. It also has a price tag of $1.63 million.

This next piano is expensive for a good cause. It’s also built by Steinway (notice a trend here?). Called the Red Pops for (RED), it is a white parlor grand piano (which in terms of size is in the middle of a concert grand and a baby grand) with a red paint job on the underside of the lid. It was used during the RED campaign several years ago to raise money for AIDs research. The entire RED AIDS auction raised $26 million, with this piano bringing in $1.925.

Here’s another upright piano (and another Steinway). As with the other upright, there’s history behind this piano. This particular Model Z Steinway runs for $2.37 million. Why exactly? It was owned and used by John Lennon and then later purchased by George Michael. Should George decide to sell the piano, it will be interesting to see if the piano increases in value further.

The Most Expensive Piano in the World

And, here it is, the most expensive piano in the world: coming in at a whopping $3.22 million, which is $900,000 more than a piano owned by John Lennon. So what makes this Heintzman piano so valuable? It is made almost entirely out of crystal. The piano was built in 2008 and used during the Beijing Olympic Games. If you’re interested to see it in use, check out the old videos on YouTube.

Nobody really knows where the piano is now, or whether it’s changed hands, but chances are, when the baby grand piano is built out of crystal and is see-through, outside of the keys and internal mechanisms, it’ll be a hard piano to miss.

It shouldn’t come as a surprise that the most expensive piano in the world would come with a price tag of over a million dollars. With the design elements and history behind it, it’s a desirable instrument that few can afford, but many musicians would love to sit down and play. Thankfully, you don’t need to invest this kind of money into a piano if you’re interested in playing the instrument, as there are plenty of other pianos near you that are far more affordable. Although it sure would be nice to take the world’s most expensive piano for a spin, wouldn’t it?©

Featured Image by kailingpiano via Pixabay.com